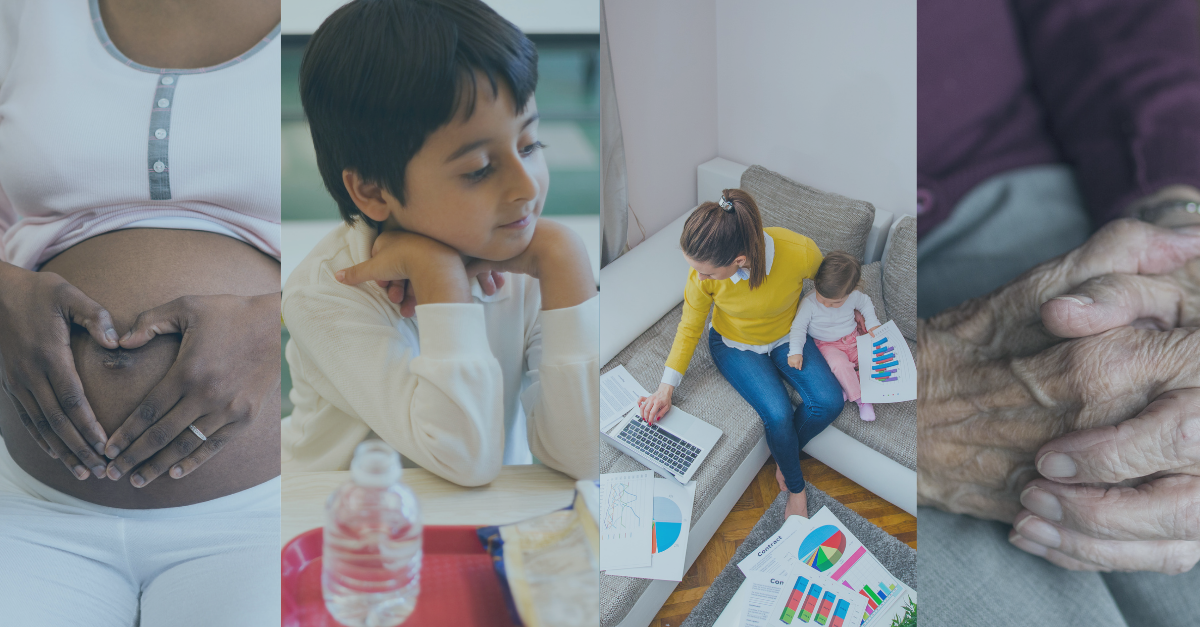 Individuals with socio-economic disadvantages are exposed to more stressors over their lifetime and face a distinct lack of resources to help cope—resulting in stress-related behavioral responses. These responses include pronounced mental illness and alcohol and substance use disorder.

In part two of our series on mental health conditions, we’ll be covering the different stressors many of our members face, their impact on health, and solutions for helping to alleviate some of that stress.

Understanding stressors and stages of life

Exposure to different stressors over time also has a compounding effect on biological stress regulatory systems—meaning that the emotional stress individuals feel has a physical toll on their bodies and gene expression.  The accumulation of these stressors and opportunities for intervention can expand over multiple sectors:

The impact of these stressors start before birth and continue throughout life. Wellth supports its members in many of these life stages to help members achieve a better quality of life from birth through adulthood.

Stage one: Prenatal stressors and how they impact mental health

Socioeconomic disadvantages increase risk factors for pregnancy, including unplanned pregnancy, becoming pregnant at a younger age, not having a family or partner support, or increased risk of domestic violence. Children that are born to mothers in poverty also have a higher risk of malnutrition during the pregnancy—leading to lower birth weight, greater risk of developmental disorders and infection, and higher rates of complications later into adolescence and adulthood.

Having access to education, job stability, and the presence of a trustworthy intimate partner can all serve as a buffer to these prenatal stressors.

In addition, a strong correlation between gestational diabetes and depression has been proven, making it important to successfully address the diabetes early-on. Higher rates of depression in mothers have been linked to increased stress for babies: including delayed skill development in infancy, patterns of aggression or social isolation in toddler years, and increased depression and anxiety in childhood.

Understanding this, it begs the question: why isn’t gestational diabetes better managed?

Managing gestational diabetes includes a strict care plan regimen with diet and exercise which can be very difficult during a high risk pregnancy especially with mother’s in a lower socio-economic bracket.

With less than 7 percent of mothers with gestational diabetes achieving more than 73 percent care plan adherence, an incentive based program such as Wellth can help mother’s manage their gestational diabetes and ensure a safe delivery for both the mother and the baby. The incentives help women in lower-socioeconomic groups be able to afford the necessities for caring for their health and their babies such as medications, diapers, and food.

Inequities in prenatal healthcare among women of color also cannot be ignored. Indigenous and black women are 2 times more likely to die in childbirth and women of color are 28 percent more likely to suffer from maternal morbidities. These startling disparities create a distinct disadvantage for the mother and the baby before life even starts.

Women with a support system such as Wellth have a much higher chance of being well equipped and well cared for during pregnancy and delivery and therefore can buffer the stressors that may occur during the prenatal period. In addition, motivational programs with support teams like Wellth can empower mothers with a platform for voicing their concerns early on, bridging the gap between patient and provider before complications become serious.
‍

As one Wellth member story shares:

“Trisha is proud of the fact that she has [with Wellth] become her own health advocate, especially when it comes to her medication. She feels that she can speak up for herself when she feels her prescribed medications need to be adjusted, and feels confident in her ability to make healthy decisions.
‍
‘This program has taught me to grow and make decisions, make sure I was on time and double check that I took my meds.’”
‍
-Feedback from Wellth Member Trisha

Stage two: The impact of childhood stressors on physical and mental health

The correlation between socioeconomic status and mental illness have been observed in children as young as three years old. Adequate mental health development in early childhood is disrupted when there is neglect, conflict, or a lack of quality stimulation. Children in foster care show up to 60 percent more cases of severe mental health disorders compared to children in the general population.

Additionally, common pediatric medical conditions—like asthma—can play a role in the mental health of children and must be addressed in tandem with appropriate social and mental health support to help these children live their best lives.

While the answer varies by child, at the end of the day, many children face social and mental anxieties that get in the way of their following prescribed care plans.

Adolescents face higher social pressure from their peers to conform. In addition, anxieties and insecurities can make teens feel uncomfortable with taking medications as prescribed—especially if that means taking their medication at school in front of others. During these core developmental years, supporting the child and assuring that the child has a strong and secure attachment with a parent or primary caregiver becomes critical.

Outside interventions and support from the community can help improve outcomes as well. For example, Wellth members who engage regularly with our support team, medication adherence jumps from 82 percent to 94 percent.
‍

For more information on Wellth’s pediatric asthma program, check out our article.

While there’s less that can be done about solving insecurities faced in the halls of high school, providing adolescents with additional support beyond friends and family can help strengthen medication adherence—and let them know that they aren’t alone. This support lays the groundwork for helping youth navigate their environment as they grow up and develop the ability to interact with others from a place of empathy.

Less than 30 percent of high school graduates from low-income populations will attend college, and even less than that will graduate.

Without education or vocational training, the cycle of poverty continues. For already marginalized populations, this means lower wages, poor working conditions, and an unhealthy work-life balance which negatively impacts health, self-esteem, and productivity.

Employers can help support positive mental health by providing job stability and a living wage, but health plans and providers can work with communities to support those gaps as well by addressing social determinants of mental health.

Supporting our low-income communities with Wellth

Wellth acknowledges the importance of a patient’s relationship with their health care provider by acting as the bridge between where the patient is in their healthcare journey and where the provider would like them to be.

There is a direct correlation between patient engagement and socioeconomic status—with engagement decreasing as the income bracket decreases. By offering a financial incentive, Wellth motivates members in marginalized communities to engage with their health plans, improve their outcomes, and ultimately reinvest in their health.

“Before the program I really didn’t have a routine because I’m handicapped, so I don’t get out much, but Wellth gives you something to do and to look forward to. To be honest, the little bit of money from the incentives really helps to buy groceries.”
-Feedback from a Wellth member

People in poverty with severe mental illness are likely to find themselves in a rotation of hospitals, homelessness, and jails. Housing Programs such as the LAMP (Los Angeles Men’s Place) are set up to provide safe and affordable housing to those experiencing homelessness but they often have an overly complicated approvals process that can take months. Any relapse of substance abuse or arrests can result in losing this housing, and in the U.S, police are the first responders to most cases involving mental health distress.

Providing members with opportunities to address their economic situation by earning regular rewards can provide the catalyst for other changes.

“I’m learning that you know, as long as I take my medication, I don’t have to worry about my diagnoses. I put that stigma on myself, you know, cause no one wants to be noted as different or special, you know all the different names they have out there for us...I’ve had a job, I’ve kept a job. I have my own apartment. For a while there, every other month, I was at the crazy house. Taking my pills kept me from all of that.”
- Feedback from Wellth Member

The Family Building and Working phases are usually simultaneous and disproportionately impact women. Dealing with the compounding stressors of work and family can negatively impact the mental health of parents, and further add stressors to their children’s lives.

With these stressors present in the mothers, there was an increasing trend of behavioral issues among their school-aged children as well with the increase of food insecurity; 22.7%, 31.1% and 36.7% respectively.

Populations over 65 are commonly overlooked when talking about mental health.

After an accumulation of life stressors, elderly populations often face additional stressful life events—such as death of a loved one, bereavement, a perceived loss of status and identity, declining health, and feelings of isolation—that can trigger mental health disorders. It’s estimated that one in four seniors face social isolation, and that isolation can lead to a 29 percent increased risk of heart disease, a 32 percent risk of stroke, and an increase in depression, anxiety, and suicide.

These populations can benefit greatly from digital health platforms with live support available, such as Wellth. When there is an issue with the app, members can call the support line and talk with a real and empathetic person to help them work through any issues they are experiencing with the app. This connection, even if it is small, helps the members feel like there is someone out there that will help check on them and actively cares about their health and future well being.

“I truly appreciated the fact that if I’d missed my check in, someone would always reach out and make sure I was okay or check the reason I missed my check in. It’s nice that they care so much!”
- Feedback from a Wellth Member

Prolonged medication adherence also extends the length of time which a person is capable of bodily autonomy and quality of living leading to prolonged positive mental health outcomes.

How can Wellth help buffer the effects of social determinants on mental health?

Medication adherence is one of the greatest obstacles in maintaining one’s mental health, and there are several reasons why getting on and sticking to healthcare plans can be more difficult for people in impoverished communities.

Many Americans struggle to get access to quality health insurance, which can make the cost of addressing and managing mental health conditions unaffordable.

In addition, Wellth provides meaningful rewards that address health equity. By introducing a financial incentive, Wellth is able to help their members invest financially in their health and communities by giving them assistance to engage economically, care for individual needs, and alleviate financial strains for better quality of life.