Dive into the science of Behavioral Economics
Motivating habit change and transforming healthcare with digital health and behavioral economics. A chat with Dr. Sagar Makanji at MagellanRX and CEO and co-founder Matt Loper on the Pharmacy Friends podcast.
June 8, 2022 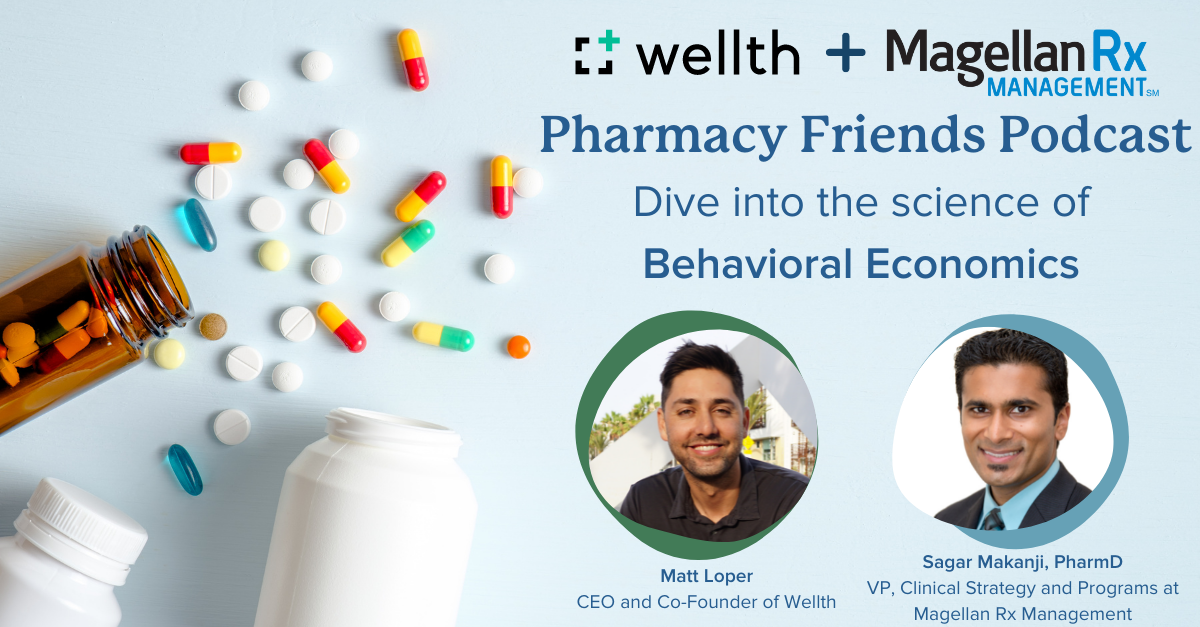 Dr. Sagar Makanji, the VP of Clinical Strategies and Programs at Magellan Rx Management, sat down with Matt Loper, CEO and Co-Founder of Wellth on the Pharmacy Friends podcast to talk about what healthcare companies can do to revolutionize the way they care for their members and improve their outcomes.

What the traditional care model doesn’t account for is the nuances of human behavior that keeps people from doing the seemingly simple behaviors that would prevent hospitalizations, high cost utilization, and save the member and their payers billions of dollars a year. They’ve tried reminders, counseling, member education and while these interventions work for a small part of the population, they aren’t treating the fundamental cause of care plan non-adherence.

That’s where Wellth comes in. Wellth addresses the human element of why patients aren’t doing what they’re supposed to be doing by employing the principles of Behavioral Economics. Wellth has helped thousands of members become adherent to their care plans including taking medication, glucometer and blood pressure readings, eating healthy meals, watching their weight, and many many others.

Matt started out his journey in biotechnology at MIT with a big picture dream of founding a company that will help populations with Chronic conditions and comorbidities. He was inspired by his family history to understand why it is that people who have the same conditions can have such different outcomes.

Matt’s mom’s siblings, Aunt Amy and Uncle Roy were both diagnosed with Type 2 Diabetes when he was a kid. While they both had the exact same upbringing and family medical history they both had vastly different outcomes. Aunt Amy, upon receiving her diagnosis, was diligent in monitoring her glucose, changing her eating habits, and tracking her medication adherence. Uncle Roy on the other hand, struggled to make those lifestyle changes even though he would acknowledge the desire to change his behaviors. This led to Uncle Roy’s condition continuing to decline eventually leading to his death in 2014, while Aunt Amy has maintained her health.

So what is the difference? Motivation.

Find out what drives humans and use that for positive change

There is a distinct intent-to-behavior gap we experience. Our brains crave instant gratification versus a long term pay off or repercussions.

The same goes for care plan adherence. When patients are asked why they aren’t taking their medication they’ll say “I forget” but is that what is actually preventing them from staying adherent?

They know what they should be doing day to day to manage their health, it just doesn’t do anything to make them feel better at the moment. The solutions for forgetfulness versus motivation yield vastly different results.

To solve for forgetfulness you:

But reminders will become a nuisance over time, behavior tracking will track adherence but not do anything to motivate change, and education makes people zone out.

To solve for motivation you:

The Endowment Effect was coined by Richard Thaler, the author of one of the cornerstone books of Behavioral Economics, Nudge, knowing that people are 2x more likely to want to keep something they feel they already have rather than gain something new.

American Airlines uses this with their loyalty rewards credit cards. “You already have x amount of miles to be able toward your next vacation just by signing up for the rewards program.” This enables that first action toward behavior change and overcomes the intent-to-behavior gap.

Wellth meets members where they are at by employing a similar strategy to get members to make that first step toward adherence. It’s a simple demo process that accommodates for all levels of technology proficiency, it’s catered to their care plan and schedules, and by checking in they avoid losing $2 dollars of their monthly rewards. Creating losses that are steeper than gains you create loss aversion.

The book Atomic Habits states that the cycle for creating a habit is Queue, Routine, Reward. It works for bad habits; people who smoke get that craving, they smoke the cigarette, they get that instant dopamine release; but can you make it work for good habits? Yes!

The trick is that the queue must be timely, the routine simple, and the reward instantaneous. Once a behavior is repeated daily for 90 days, it becomes a habit.

Creating personalization at scale requires data. Social media platforms do this to create an addicting experience and drive engagement. By utilizing data optimization for member demographics you can create the most effective queue to gain engagement. Offering an intervention that tells you “Taking action now can prevent bad outcomes down the line”, such as hospitalization, expensive medical bills, or even death.

A great example is Wellth’s partnership with a large medicaid plan in Arizona. In the first program launch, Wellth on-boarded the 3000 member target in 90 days. With thousands of outreaches to medicaid eligible members Wellth has been able to refine outreach tactics using data that optimizes enrollment by finding the right time, type, and messaging for enrollment outreach to best accommodate the subsequent expansions within this customer’s member base.

All the data collected enables you to increase optimization, improve results, predict drop off, and be able to intervene at crucial moments in the member journey. It also allows for personalization based on disease state, age, gender, ethnicity which encourages engagement. All the nuance behind data personalization pays off to give members the right message that is needed at the right time.

The next component in creating a habit building, yet positive experience for members is implementing the reward component.

How do you strike the balance of the right amount of reward at the right time for incentivized habit formation?

The downfall of other incentive programs are that they benefit the people who need them the least. People who would do the desired action regardless of incentives. A great example is the gym reimbursement programs saying “If you go to the gym X amount of times the first month you get your membership payment back.”

What’s the problem with this structure?

It is not timely in the queue-routine-reward cycle enough to encourage someone to keep up with a new routine. Especially not beyond the promotion. The only people reaping the benefits are the people who would go to the gym regularly anyways.

Wellth targets specifically the hardest to reach populations. The previously unengaged, high cost utilization, multiple chronic conditions members. If the old interventions aren’t working for them, how can we make a model that will?

The dynamic structure of the incentives can be modeled to maximize ROI for the customers– costs saved from the habit changes being greater than the cost of the program– while being enough to motivate that change for their members.

What happens when the rewards go away?

Utilizing a queue-routine-award structure over a 90-day period should create a foundation for stickiness but of course it can be dependent on the action, the reward amount (if the loss of the reward is too great the chances for maintained adherence decline sharply), and finding the right timing and messaging.

While some drop off can always be expected when the rewards go away the results are still vastly improved from the control group.

Ultimately, yes, rewards can maintain a habit beyond the rewarded time frame.

It starts with that first outreach.

The member gets a postcard, a text, an email, a facebook ad and that creates name recognition and familiarity so when they are ready and they reach out to us or they get a call from a member enrollment specialist, they already have a basic knowledge of who we are.

Member specialists come into every member's interaction with empathy and openness for human connection. They meet the members where they are at and guide them through enrollment, even members that only use their phones to talk to grandkids. They are walked through a demo task and are set up with notifications that start the following day so that the first step to starting a new routine– the hardest hurdle– is done with support and the rest is paved for them.

The next day, the member receives their first notification to complete their first check in, and are instantly notified of their rewards. This first action is easy and builds excitement and momentum for the member to remain engaged with the routine.

However, as we all know, to err is human. To account for any hiccups on the way, a member support team is available for any technical issues and they’ll check in if there are too many unusual missed check-ins to find out why. This way any issues with side effects, timing, hospitalization or technical obstacles are overcome in a timely manner so habit formation isn’t disrupted.

The results speak for themselves. For Wellth’s pilot program with Magellan the member group had adherence levels averaging about 100%. Wellth allows for care teams to track adherence in as close to real time as possible rather than having to wait months for pharmacy claims data.

Other programs have seen similar results with early programs showing a 45% reduction in ED utilization which has remained consistent across programs with larger and larger member bases.

While the quantifiable metrics are there to support Wellth’s model, the real impact is how it has changed the member’s lives. It’s that reminder why we do what we do and the push to keep going.

One Wellth member shared their story recently, Julian. Julian was in the Severe Mental Illness and Substance Abuse Disorder cohort after a back injury on the job led him into the opioid trap that is an epidemic in this country. Julian is a single father of four that juggled physically demanding jobs to support his kids that left him with several severe injuries over the years. With the help of the Wellth app, he has been able to remain sober for a year and maintain 100% adherence. He’s been able to see his oldest daughter get a full ride to university and become the first college attendee in her family.

Seeing great statistics is one thing but having members take the time and talk about the impact of the program is a reward for Wellth and the care plans they work with.

There have been a lot of conversations about Behavioral Economics and CMS regulations and reward structures going forward and the most important step for Wellth is to keep those conversations open. Wellth has been fortunate to be able to collaborate on policies as they are different state to state to advocate for the impact of the appropriate use of rewards, sensitive to preventing cherry picking, financial abuse, and fraud.

The Value Based Insurance Design Model is supportive of the use of Behavioral Economics and advocates for its use in healthcare plans. It can be a very powerful tool when it is used correctly and most effectively.

The regulatory framework in healthcare is incredibly complex but it is important to take the time to fully understand so Wellth can play an active role in molding and shifting the conversation around the use of Behavioral Economics structures and how they work.

Moving forward, Wellth and their partnerships such as Magellan are doing the work to find out why patients are doing what they are doing and how to guide them towards making steps to engage and take ownership in their healthcare.